an idea for VIP mode

an idea for VIP mode

I have got an idea recently. It may sound foolish and I have decided to put it here:

Since VIP is supposed to be the weakest person, would it be better if there is a change of his equipment?

Currently, a VIP has a pistol, tear gas and pepper spray. When the server is full (presumably 8 vs

, sometimes SWAT gain advantage in maps where both sides inevitable encounter in narrow areas, such as Reb Library, Northside Vending etc. because VIP often runs in the first place, spraying bullets on suspects and sometimes suspects (usually inexperienced players) would accidentally shoot him, ending the round prematurely with SWAT winning without much effort.

In short, there should be a balance in VIP gear - while giving him some power of self-protection, he should not be able to shoot bullets in a relatively high speed.

Below are some of the possibilities, food for thought:

- Pepper Gun + Taser + Spray = Despite without the ability to kill, it is more than enough for him to defend himself (But take away his gas)

- Colt Python + Gas = Now he is able to kill, and very likely to kill with 1 single shot. Therefore, we take away his Spray as an offset.

- Taser only, but he is with all other gears - Gas + Bang + Sting + Spray + Wedge. Self-explanatory enough, weak weapon but strong gear.

I apologize for my crazy idea but I am hoping there would be some new fun. 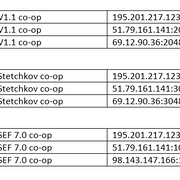 Re: an idea for VIP mode

I assure you that I have seen very strong players play. and the vip kills 2 \ 3 before being captured. for suspects, killing the VIP can happen to anyone, no one excluded
I have played on other servers in the past some with more powerful vip weapons others with less powerful vip weapons
my conclusion is that the weapons he has are good for maintaining a certain balance
if vip is too strong swat wins very often and it is not nice for the suspects if vip is too weak and cannot kill for swat it becomes difficult and for the suspects it becomes easy to take the vip
except that the vip is not very pro but if it happens to a weak player he does not enjoy himself because he can not do anything while with the current configuration it is balanced enough

this is my opinion but let's see other opinions about it